Captain Fantastic may have been my favorite film of Sundance 2016. Viggo Mortenson is a home schooling father with six children in the wilderness forest somewhere in the Pacific Northwest, completely off the grid. The film opens with him teaching his oldest son to hunt a deer by making him kill it with only a knife and wrestling it to the ground.

The young actor, Brit George MacKay,  who plays the oldest son, Bo,  was amazing. The family must leave their forest home to attend a funeral, and the children come to realize how isolated they are from the real material world, and how they may have book knowledge, but they don’t know how to interact with other people outside the family. In one of my favorite scenes a young girl flirts with him at a campsite on route.  They kiss, and then he falls to his knees to propose and ask her mother for her permission to marry her daughter.  They both laugh and think he’s just kidding, but he’s acting just as he’s read about in all the classic novels he’s read.   He afterwards confronts his father, “I don’t know anything!”  The oldest son wants to go away to college, but fears his father’s reaction. 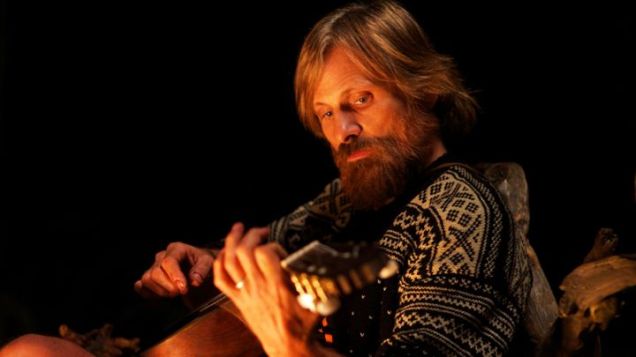 Viggo is the only person I can imagine in this role. He is exceptional, and this may be the finest role of his career.  (And that’s really saying something, after Aragorn, Eastern Promises and A History of Violence) He has the intelligence and the screen presence that makes you believe this is a charismatic father who could raise his children to be philosopher kings.  And that he could take it all too far.  He doesn’t let the kids believe in Christmas, but they celebrate Noam Chomsky Day!

Writer/Director Matt Ross premiered Captain Fantastic at Sundance in January.  He’s known more for his work as an actor in series like HBO’s Big Love and Silicon Valley.   Matt Ross talked at the Q&A about how he grew up in communes himself in California.   He shows us the simple pleasures of this life, singing around the campfire together in the evening — but also how isolating it is. 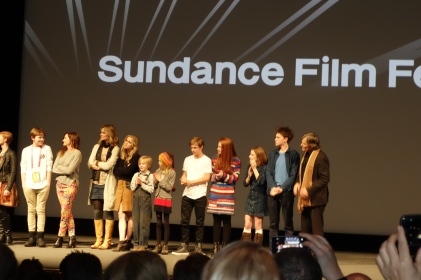 All the kids are terrific, and have great chemistry together and with Viggo.  You could see the rapport they still have with him at the Q&A.  I was stunned at the performances Matt Ross and Viggo got out of these very young child actors.

Frank Langhella (always excellent) plays Viggo’s father-in-law, and they have a confrontation over the way he is raising the children.  After one of the kids has an accident, Langhella wants to take the children away and sue for custody.  You need someone as powerful and imposing on screen as Langhella to be a worthy antagonist for Viggo Mortenson.

This film is quirky and heartfelt like Little Miss Sunshine.  I got teary eyed, and it has a very satisfying hopeful ending.

Captain Fantastic released today in a limited number of theaters.  It’s playing in downtown Chicago, and I hope it will move out to suburban theaters in the coming weeks.  I’m hoping Viggo gets an Oscar nomination for this role.